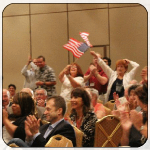 2014 was indeed a challenging year. Our volunteer staff is worn thin from the fight, but we press on. We press on because despite the efforts and deep pockets of a growing opposition, we are still seeing the political needle move to the right.

Our efforts to oppose the nationalized Common Core education take-over has been challenging but look at what we accomplished! You may have heard that Jeb Bush is “exploring” the presidency in 2016. Many news agencies are reporting that one of his biggest challenges will be overcoming his association with the unpopular Common Core education plan. If it weren’t for the tea party, that opposition would not exist.

We have residual benefits from our opposition to Florida health care exchanges. Because of our efforts, Florida does not participate with its own exchange.  Now, thanks to a current lawsuits the entire law may collapse.

In 2014 the East Side Tea Party of course maintained its monthly meeting schedule and hosted experts on veterans issues, income inequality, property rights, Common Core, immigration and more. In case you’ve forgotten, meetings are always held on the second Monday of each month at 7PM. We’ll see you again on January 12th.

More than monthly meetings, we launched free weekly classes on our nation’s founding principles. They have been taught by professional educators and open to the public. New classes will begin in January of 2015 as we navigate through a program based on the book The 5000 Year Leap.

Your Tea Party Activity Center was home base for local precinct walks and statewide phonebanking for organizations such as Americans For Prosperity and Florida Family Action. Our partnership with these organizations including Orangecountynow.org were crucial to the almost statistically impossible victories of the 2014 elections.

At the end of the year we reached beyond politics to wish children  a Merry Christmas. Hundreds of gifts were bestowed, by tea party members, to the children of Harvest Baptist Christian Academy, a private school on Paramore ave which accepts no government funding. The kids were overjoyed by your generosity.

Every New Year we look to the future and reflect on the past. 2015 MUST be a growing year. We need everyone to step up on recruitment and engagement. We have no advertising budget. We have no employees. We  educate the population because of your donations and volunteer efforts.

Recently a fellow patriot passed away. At the end of her days she wondered if her efforts had merit. My response to those who ask that question is “Where would America be without the Tea Party?” There are more people engaged in the business of our nation. More people informed. More people looking beyond their own pockets and parties to cast votes based on reason. By no means do we run a perfect, well oiled machine. We don’t have the funds for oil 😀 . But we continue to improve and learn on the “job”.

Have an idea? Want to help the effectiveness of your tea party? Want us to do more? Donate or join our Advisory Council. Our next Advisory Council meeting will be January 5th at 7pm. Let’s commit to the team in 2015!

Donations are are not limited or tax deductible