I have been an active Reagan Conservative. I worked on the Reagan campaign and I had the pleasure of meeting Mr. Reagan, I worked with his Press Secretary, and my wife and I danced at the Reagan’s Inaugural Ball. I have been active in Republican Organizations since that time and I strongly believe in Conservative Republican Principles.

Recently, the Republican Party of Florida sent an expensive mailer to the Republican voters in FL House District 50 (see below). The candidate mailer included a candidate petition endorsing the current Progressive Republican FL House member in District 49 who has recently filed to run for the Fl House District 50 seat. Thus, the Freshman District 49 House member has chosen to abandon his constituents in 2016 and run in the FL House 50 Open primary race with the endorsement of RPOF.

This is 2015! In my opinion, RPOF is attempting to squash Grass-Roots Conservative Candidates from entering the 2016 FL House 50 race by sending out an endorsement mailer and petition with the Republican Party of Florida stamped on the candidate mailer.

This should alarm you as a Conservative Republican!  How many Grass-Roots Conservative Candidates will enter into a long FL House race when the RPOF has already blasted Republican mailboxes with their endorsement One Year in advance?

Join me in supporting a fair playing field in Republican Campaigns at the next Republican Executive Committee meeting by voicing your objection to RPOF interference in Grass-Roots Conservative campaigns. RPOF funds are better spent defeating Democrats instead of splitting our Florida Republican Party.

Without Ethics, Our Corporate and Political Way of Life is Like a House of Cards 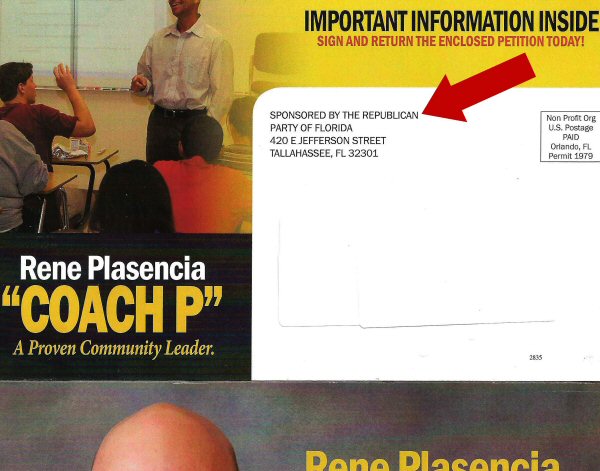 « Presidential Research Project
A Republic … If We Can Keep It »

6 thoughts on “District 50 and RPOF Intervention”