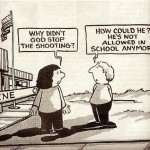 Today the Orange County (FL) School Board decided to prohibit the passive distribution of Bibles from third party organizations in all schools in the county. They claim they are not prohibiting the free exercise of religion. I am not sure what they mean by “free”.

You cannot say Americans have the freedom to perform a legal action and at the same time, confine that freedom to areas where today government feels are appropriate. Once you have permitted the confinement of the free (and legal) exercise of religion, you then have the authority to abolish it entirely.

In a prior act, the school board banned administration, coaches, and teachers from any religious influence over the students. In one ruling they placed their employees in a choke hold, threatening their jobs if they dared to speak of God. No longer can a coach lead his players in prayer. No longer can a teacher discuss any of the biblical origins of our founding.

When I was in college, one of classes required that I research and create a group presentation on Alexander the Great. As I researched I discovered that much of what drove him and his culture was mythology. Much of the Mythology was contained in books like The Odyssey and The Iliad. The Iliad was so important to Alexander the Great, he carried it with him always, even while conquering foreign lands. To understand Alexander the Great, his family and culture, you need to study the Iliad.

If you take the Iliad out of the Alexander the Great biography, you can’t understand why he did what he did. If you take God out of the Reverend Martin Luther King’s “I have a Dream” speech, as some reading classes do, you cannot truly decern the message the Reverand was trying to give. If you take the Christian faith out of the Constitutional deliberations you may be able to derive at what happened but not why. If we teach that there is no higher power, either in action or by omission, we imply that rights are endowed by Government and not by a creator. If we take the Bible out of schools, how will the students understand our culture’s past and present.

If a student today were to ask about the signing of the constitution in 1787, What should he make of the words “Year of our Lord”. Were they referring to feudalism? If so, is it just a typo that the word “Lord” is capitalized? A teacher could respond that that was just customary at the time. Such an answer would be truthful but not complete. This common dating format was only common because of the overwhelming influence from a European, Christian, culture. Lord is capitalized because it is a name and title given to Jesus of the Bible. Other Christian influences can be found in the judicial system, the election of representatives, with the limitations on government and the separation of powers.

Why did Madison desire a divided government? With all the complaints today about gridlock in government it would be much easier if the individual houses of the legislature were combined. To avoid conflict and to streamline things we can merge it all into the executive branch. Our founders rejected an all powerful executive, not only because of their conflicts with King George III, but also because they recognized no King other than the King of the Universe. Madison and other founders knew the Biblical concept that natural man is sinful and therefore could not be trusted with ultimate power. Similarly, if one man is corruptible, so is mankind. For these Biblical reasons, the founders shunned the concept of kingly rule and, at the same time, resisted the rule of the mob, or a Democracy.  To understand our history and culture we need an understanding of the Bible.

We wonder about how our culture has degraded. Today children don’t learn about service to a higher power. They are taught only to serve their own good. Schools constantly reinforce a secular humanist religion. Indeed, the school board meeting today began with a moment of silence to pray and an audible pledge to a flag. One is hidden. The other is proclaimed. This is the new norm in schools. Religion is treated as shameful. It must be hidden in approved locations where it cannot grow and infect others.

All of the signers of the Declaration of Independence paid homage to a creator who bestows unalienable rights. Our Constitution includes a passing mention to the Lord of the Bible. The founders who crafted and signed these documents came from many religions and battled over mant topics. Still, nowhere can you find a disagreement on the authority of the Bible. We can discuss many instances where the Bible and religious texts were not only sanctioned but pubically funded.  These founders, in one of their first rulings created the North West Ordinance  where they agreed  that “Religion, morality, and knowledge, being necessary to good government and the happiness of mankind, schools and the means of education shall forever be encouraged.”

We have gone from prominance in our schools, where every student had a copy of a Bible, to today where, if it exists at all, it is covered in dust in a library, out of sight, out of mind. How do we expect this religion of no-religion to imact our nation’s future?

Is there a solution?

We can usually agree that there are some roles of government which are proper. Most agree, for example that it is an appropriate function to fund a police force which protects our rights. On the subject of denomintions, it is universally understood that government should not take sides. The school board has. They actively support secular humanism in schools and the religion of democracy. We submit that the school board avoid the deluge of lawsuits that will commence and repeal its sanctions on religious expression. Allow the parents of each school in your PTAs the power to decide on what religious materials they will or will not permit in each school. It does not take a village, it does not take a government. It takes a parent. The government has no right to make any decision on religion of the children they teach. Let the parents of each school make these judgement calls.

« The Proper Role of Government
God in Schools: Out of Sight, Out of Mind – Part II »

3 thoughts on “God in Schools: Out of Sight, Out of Mind”